1. The duck and the moon

Azam Aris: They are actually trying to do this here now—send an astronaut into space. Not just for scientific experiments but because of the idea that there has to be a Malaysian in space. That is OK for me. It’s actually good. You can create this image in education, in high schools. The moon is a kind of Malaysian dream. It is costing a lot of money this astronaut. But there are many stories about the moon. In fact moonlight is a potent energy in Malay.

So I like to create characters and images to make a story happen. With this story there are two plots. This is the first one [image above] with the general on the lunar surface. And this is the second [image below], where the general faints after giving orders and then everybody changes into a style of duck, with splayed legs and peaks. I like the duck, but it’s not about the duck so much as I just wanted to change the scene from the military style of the first plot.

I’m not really thinking about what the duck is. I just wanted a weird thing. The casts and these sets will be the basis of final works that will be painted. 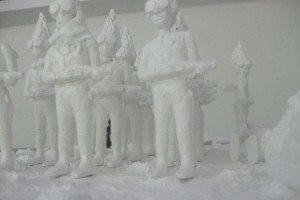 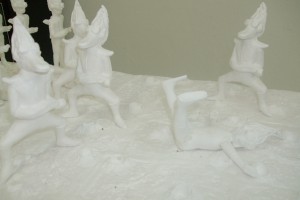 Azam Aris: This is another storyboard of the ducks for a different work. The acting is different but the characters are the same. They are throwing something, pouring something into a big pool (a sink), and the other one is turning on the tap. It’s all about making things disappear, evidence disappear, making everything clean. So the concept is cleaning, black money or whatever.

Azam Aris: My work is to make connections … so with this work it’s a mobile: this arm on the drawing is going ‘tuk tuk tuk’, moving, the hand with the axe is rotating to cut the wood. He’s burning the alien. That’s the story. 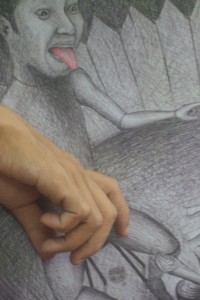 Azam Aris: It’s like a partition for your own side. Actually it’s like going to the backyard. I’m creating the small garden that people can’t see unless they are out the back. That is where things happen.

It’s a similar kind of story in wayang kulit. Wayang is the shadow theatre and kulit is the animal skin on the puppets. In wayang kulit they understand that there is more going on backstage. It’s where the gamelan is, and the tok dalang is the puppet master: the man who controls everything. I’m trying to use this concept with this idea of the backstage, the hidden place, the secret place where the action actually happens.

There is another aspect to this image of the fence too, somehow, where I’m thinking about the wall in the Middle East: the Muslim wall in Jerusalem. I’ve used this fence image as a backdrop in a lot of work.

Azam Aris is a resident artist at Rimbun Dahan, Kuang, Selangor, Malaysia, through 2012.

This is the archive for Stamm, an online publishing project initiated by artist Jonathan Nichols in 2012.  END_OF_DOCUMENT_TOKEN_TO_BE_REPLACED